Depressing but well-written book about men's ageing and mortality - specifically a man, who is an advertising executive and serial marriage cheater. He's really quite hard to like, but the story is told from his perspective most of the time, so all of his infidelities and bad behaviour seem like natural responses to his life situation rather than choices.

Because he's rich, and his loving health-filled brother even more so, none of the consequences of his failing body are financial...for most people in the US his string of conditions would be devastating and impoverishing, but he's left wondering whether to sell his condo on the Jersey Shore and move back to Manhattan.

There's one memorable speech given to his decent wife that he cheats on with his secretary and then with a Danish fashion model (who subsequently and regretfully marries) that is so good it's worth quoting at length:

"You can weather anything, even if the trust is violated, if it's owned up to. Then you become life partners in a different way, but it's still possible to remain partners. But lying - lying is cheap, and contemptible control over the other person. It's watching the other person acting on incomplete information - in other words, humiliating herself. Lying is so commonplace and yet, if you're on the receiving end, it's such an astonishing thing. The people you liars are betraying put up with a growing list of insults until you really can't help but think less of them, can you? I'm sure that liars as skillful and persistent and devious as you reach the point where it's the one you're lying to, and not you, who seems like the one with the serious limitations."

Incidentally, the 'Everyman' of the title is not because the central character is representative of every man, but the name of his father's watch shop - chosen because it didn't sound too Jewish.
Posted by Jeremy Green at 11:53 PM No comments: 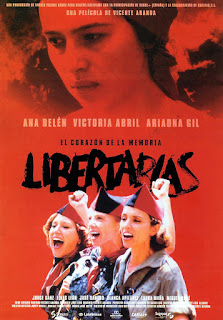 A good historical film about anarchists - especially the 'Free Women' - in the Spanish Civil War. It rather plays down the conflict between the different factions on the Republican side in favour of conflicts within the anarchists - over whether the militia should be fully militarized into an army with ranks, over the role of women (whether they should be fighting on the front line or only in support roles). It's really good on the latter, and I think it handles the extent to which the revolution did and didn't address these issues well.

It's quite gory, and I think a little ambivalent on the strong anti-clerical element on the Republican side. The Spanish left really, really hated the Church, seeing it as both an exploiter in its own right and a key ideological and institutional supporter of the rich and the ruling class. During the early phase of the Civil War there was lots of burning of relics, religious art, and church property. This is well depicted in the film, but it wasn't clear to me how the film wanted us to feel about it. The fact that we see much of this through the eyes of a young nun who is sort-of rescued by anarchist militiawomen increases the ambivalence. At one point we see the summary execution of a bishop, and the nun's revulsion.

A good film and worth the two hours spent on it - some great music and crowd scenes too.

Watched in the middle floor at Springhill with the Stroud Red Band after a rehearsal - film obtained by informal distribution.
Posted by Jeremy Green at 4:56 AM No comments:

Review of 'Underground to Palestine' by I F Stone

Well, this is a book of its time if ever there was! I F Stone, a Jewish-American left-wing journalist travels to Europe to see for himself the Aliyah Bet, the illegal Jewish immigration network that stretches from the DP camps  across the Mediterranean to British-controlled Palestine.

It's interesting partly because it fits into another narrative from the one that we're used to be about Zionism and the establishment of Israel. Lots of the displaced Jews are not really Zionists but are heading for Palestine because they see no alternative, and certainly don't want to stay in their countries of origin where antisemitism is still rife. There's no anti-Communism to Stone's story either - quite a few of the displaced Jews fought with the Red Army, and in a number of places the Communists are willing and sympathetic helpers to the would-be emigrants.

The book includes a much-later essay about Stone's position as a pro-peace, pro-Palestinian supporter of Israel, which by the late 1970s he was finding increasingly uncomfortable. Again, very much a piece of its time; Stone wants to reclaim the history of 'the other Zionism', from Brit Shalom to Hashomer Hatzair. I did too, once.
Posted by Jeremy Green at 9:26 AM No comments:

Review of 'The Power' by Naomi Alderman

Well, so much for the suggestion that satire is always conservative (see earlier review of The Twelve Chairs). This is a really powerful, thought-provoking dark book. It's mainly a satire on male power, and has made me feel ashamed at just how much brutality against women that I ignore because it's 'nothing to do with me' - rape, genital mutilation, gang rape in war...all thrown in to relief by making women who are perpetrating the violence against men. In the first few pages I thought 'Oh, I get this...' and wondered how it was going to carry on for a book-length. But it keeps developing, and there are also good characters and plot elements.

There's also more, in the depiction of refugee camps, borderlands, organised crime and trafficking...lots of other cruelties that we just don't think about all that often. And the age of new media, and spin politics. Actually this turned out to be too dark to read at night, because it kept me up.

A really great book. Everyone (but especially men) should read it.
Posted by Jeremy Green at 11:54 PM No comments:

Review of 'The Twelve Chairs' by Ilf and Petrov

I saw the Mel Brooks film years ago, and remember it as quite funny - enjoyable to watch as a socialist, not horribly anti-Soviet and with some jokes that appealled to someone who knew a bit about the history. So I have meant to read the book but never got round to it until I came across a copy on someone's shelf.

It's also quite funny, and quite surprising too. It's set in the late 1920s, which I think is the period of the NEP, so the economic and political situation feels quite fluid, open and a bit unresolved. I read in the afternote that Ilf and Petrov wrote political humour and satire, and never had any trouble from the authorities, and it's not hard to see why - there's really nothing at all anti-Soviet in the book at all. The targets of the humour are a venial priest, a grasping ex-noble, a grifter...all people that the Soviet authorities would be pleased to see ridiculed, as long as it was OK to acknowledge their existence. There's a ridiculous group of anti-Communist conspirators too. I wonder if all satire ends up being small-c conservative, so that in a Communist country it's also pro-regime.

That said, it really is quite enjoyable, well-written, and funny.

Posted by Jeremy Green at 8:06 AM No comments:

Another early Almodovar, and was probably quite shocking to a Spanish audience when it first came out, but now seems quite contrived and even a bit annoying. Set in a nunnery where several of the nuns are taken Class A drugs - the Mother Superior is on heroin, one of the others takes acid, and so on. Oh, and there's a tiger in the convent. There's a trashy nightclub singer who takes refuge there and eventually does an inappropriate big number before a visiting clerical dignitary (that bit is actually quite funny) but otherwise it's a bit pointless and shapeless.

Watched via laptop and projector at The Old Co-Op on Horns Road, Stroud - part of Jane's Almodovar season.
Posted by Jeremy Green at 7:51 AM No comments:

Film about a lawyer who moves to LA so that her divorced husband can have access to their son, becomes involved with a firm that does migration tribunals, and becomes a hero to clients that the firm has more or less abandoned in favour of procedural compliance. It's a true story and provides some insight into the cruelty of the US migration, though there are lots of quite nice people in the system that she meets on the way.

Watched via Netflix app and Chromecast.
Posted by Jeremy Green at 7:46 AM No comments:

Review of 'Catch the Wind'

French film in which a woman whose factory is closed to be relocated to Morocco decides to take up the statutorily-defined offer that she can relocate. Interesting premise, not so well done - actually, the woman has to be pretty dopey to want to turn down redundancy money and do this instead, despite the advice of the shocked HR woman and her co-workers. And she is - she seems to manage life in Morocco fairly badly, not noticing that all the other women on the workplace bus are wearing headscarfs, going off to walk on her own in dodgy parts of town where she gets robbed, and so on. She learns that people in factories in Morocco are treated quite badly, and that women have a hard time in Islamic countries, but eventually finds true friendship because...

Watched on smart TV via Netflix app.
Posted by Jeremy Green at 7:40 AM No comments: