Speech for the Red Herring Bart Mitzvah on 18th November 2007 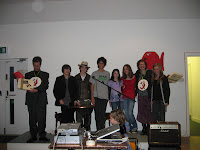 In my memory, the rabbi always began his sermon with the words “this week's sedrah comes from...”. This was a signal for everyone to make themselves comforable and prepare for a little rest. So snuggle down.

Our Torah reading today comes from the portion Va-Yetse – 'and he left'. The chapterisation and verse division that we Jews borrowed from the Christians makes this Genesis chapter 28 verses 10-22. The bit that the kids read covers the very important story of Jacob's ladder, where the patriarch who is going to become the ancestor of all Israelites and therefore all Jews, sleeps in the open with a stone for a pillow. There he has a dream in which he sees a ladder going between heaven and earth, and angels ascending and descending.

This really short passage is so full of symbolism and associations that it's almost embarrassing. For kabbalists, the ladder represents the relationship between higher and lower worlds – because they see the material world that we experience as being only one of many different realms. For those of a more fundamentalist inclination, the story indicates the future location of the holy temple, and of Jerusalem – although there is nothing in the story that says so, they interpret the place where it happens as being Mount Moriah, and therefore confirming the centrality of Jerusalem in Jewish worship. For nationalists, verse 13 assigns the land to Jacob and his offspring, and verse 14 confirms the descendants of Jacob as having a special status among all the families of the earth.

Christians interpret the portion as presaging the future coming of Jesus as a bridge between God and man. Even the Scottish Nationalists get a look in, because the stone that Jacob used for a pillow is said to be the Stone of Scone, on which Kings of Scotland were crowned – and which was subsequently looted by the English and carried off to Westminster Abbey.

Very clever rabbis have spent a great deal of time examining the words of the text, finding many levels of meaning, fleshing out the details, and explaining some of the apparent contradictions and inconsistencies. Why do the angels need a ladder – what happened to their wings? How big was the ladder – how many rungs, and how wide were they? How come when God tells Jacob that he will protect him wherever he goes, Jacob is still frightened about something only a few chapters on? The interpretations go on for many pages, and it all makes me very proud to be a secularist.

But secularists don't have to be dreary. We can enjoy rituals, and ceremonies, and symbolism too. The ladder seems to me to be a great symbol for a Coming of Age rite of passage – an event that marks a tranistion from one status into another. Many societies and civilisations have them, and they seem to me to be an entirely good thing.

One of the things we do in our secular cheder is to look at Jewish customs and traditions as something that is evolving rather than static. Nowhere is this more evident than the custom of the big barmitzvah. By now everybody really does know the joke about the elephant safari bar mitzvah, but the big bar mitzvah, as we know it, isn’t a timeless tradition at all. It’s only about fifty years old. Older men here will perhaps remember a small celebration at their own house, with a few bits of plaive cake, some bridge rolls, and some tiny glasses of cherry brandy.

Even the religious bar mitzvah ceremony isn’t all that old – perhaps a few hundred years. Once upon a time the big coming of age event for boys was around five years old, when the child was taken from its mother and given to the Rabbi to be educated. This was a public ceremony, which included the child being carried through the streets, and involved special foods, including food like eggs and cakes on which the verses of the Torah were actually written (and by the way, this led to some very interesting discussions between rabbis as to whether it was permissible to excrete holy words).

It’s only from the fifteenth century onwards that Jewish children were seen as taking on the rights and responsibilities of adulthood at thirteen. The ceremony of the bar mitzvah, to mark the Jewish boy as having attained the age at which he could be counted in a minyan and called to the reading of the law, dates from this time. The big party, the catered meal, and so on didn't come for another four hundred years, and most of that was made up by the caterers.

We have chosen to call this ceremony a Bart mitzvah, after the celebrated character from popular culture, Bart Simpson. It's fun to say that in an appropriately rabbinical voice, and if I was really doing this right I am sure I could come up with some really great numerological allusions about the letters of Bart's name. In fact, Bart presents many theological problems, not least the fact that his voice is actually provided by a woman, so that if the character were to begin to sing orthodox Jewish men would have to quickly switch off – because it's forbidden to listen to a woman singing. Once again, reading that it's hard not to feel a burst of pride at being a secularist.

But there is also a wonderful web page called 'The Simpsons Talmud', which presents the episode featuring Rabbi Hyman Krustovskyand his son Herschel Pinkus Yerucham Krustofski (or Krusty the Clown, as he is perhaps better known) as if it were a Talmudic anecdote. It's possible to appreciate this on many levels. The content of the interpretation, which like the Simpsons episode itself treats the issue of parental estrangement from a son with great insight and warmth. The style of the web page really does present itself as it were a page from the Talmud. And the ability to enjoy the joke seems to me to be a vindication of what we are trying to do here – to appreciate the Jewish heritage not in opposition to living in the modern world, but as a way of getting more out of it. The Simpsons Talmud, and Woody Allen, and lots of other things are funnier if you understand the nuances of Jewish culture. Relating to the Holocaust, and other holocausts, and the experiences of refugees, is different if we recognise the relationships of those stories to our own personal stories.

In our group we have tried to cover all this stuff in one way or another. We began, more than three years ago, with the words “Once there was a rabbi, a man of distinction, who lived in the land of Uz.” This is the beginning of the story “The Rabbi who was turned into a werewolf”. We've spent a while wandering in some of the back lanes of Jewish culture and folklore. We spent a long time in the company of the wise men of Chelm. We studied the stories of the Bible, with the help of beanie babies, an assortment of funny voices, and a really lurid comic-book style version provided by some American bible society.

Somewhere along the way, we invented Jewish Top Trumps, merrily infringing copyright as we went. We made cards for important Jewish heroes and leaders – like Emma Goldmann, Rabbi Akiva, and Amy Winehouse. We made cards for fictional characters with some claim to be Jewish, too, like Tevye the Milkman, Krusty the Clown, and Moses and Jesus too. As of today, there are some new top trumps in the pack, because we've made some for all the graduating students – have a look at the version on the laptop over there.

We've learned some bits of Yiddish, including a great number of words for the male anatomy – why are there so many? We've learned, more or less, to read Hebrew, or at least to recognise some of the letters.

We've watched some good films, and some really bad ones – I'm still not sure why it turned out that our version of The Ten Commandments had subtitles in Brazilian Portuguese. We've even made a film, which you will get to see in a few minutes.

We've done a bit of cooking, a tiny bit of singing, and the occasional craft activity – we made clay dreidels, and we used up the clay to make idols like Abraham's dad used to do for a living. We studied interior decorating, Solomonic style. We've tried to make sure that it was never like school, and I think we've mainly succeeded – although there were a few dodgy moments when we slogged through the background history to Israeli-Palestinian conflict, and I'll lay odds that no-one remembers very much of that.

And we've had good fun, most of the time. I'm going to miss it, and all the students, terribly. The class is going to continue, with some of the students who aren't graduating yet, and perhaps some new ones. It'll be different – not better, or worse, but different for sure.

Now one of the things about this sort of sermon is that it's really hard to end. Perhaps that's why they go on for so long. When I was young, the rabbi used to finish up by presenting the barmitzvah boy with a present from the congregation – usually the book 'The Torah is Our Guide'. I still have mine, and have kept it as fresh and new as the day it was given to me. Well, if the trick worked for him, it might work for me, so I'd like to end the sermon by presenting the students with a specially chosen book. I'd like to, but those mamsers at Amazon have let me down, so instead I will present them all with a picture of the front cover – alongside their graduation certificates, of course. So it gives me great pleasure to present you all with this picture of the front cover of “Yiddish with Dick and Jane”, and may the book when it actually arrives give you many minutes of pleasure.

Posted by Jeremy Green at 12:38 AM No comments: