Review of 'The Uninhabitable Earth: A Story of the Future' by David Wallace-Wells

Great if bleak survey of current thinking and perspectives on climate change, this works well as a gateway to the literature. It's well-written and readable, even if - I understand - some critics think it's too gloomy and takes worse-case scenarios as central ones. Lots of links to other material, and to literature about others' reflections on the implications of climate change for politics, ethics and human history.

A great, awful, book...it has left me rather despondent. Most of the fixes proposed for climate change are much too little, too late - and most seem socially implausible even if they are technically possible. Were we to go for carbon capture and storage, for example, then building the machines to do it at the levels required for the Earth would seem to occupy most of the economic resources of civilisation. Sort of do-able in principle, but probably not in practice.

He doesn't make the link, but it rather reminded me of the Wittfogel stuff about 'hydraulic societies'...only a kind of bureaucratic despotism will be capable of re-organising society and the economy towards the permanent management of the atmosphere that we will be needed to ensure our survival as a civilisation. So whichever way you look at it the party - including not just consumerism but also a market economy and liberal democracy - is over.
Posted by Jeremy Green at 2:09 AM No comments:

Note in passing: this was part funded by the Irish Film Board. Why? No Irish content or actors, as far as I could tell. What is it with Film Boards?

Watched via BBC iPlayer and Chromecast.
Posted by Jeremy Green at 1:37 AM No comments:

Review of Papadopoulos and Sons

Family saga comdedy drama, with some decent acting and cinematography, rather let down by a script that looks like it was rushed through and never even read properly. Lots of the dialogue is creaky, the characters behave in ways that is inconsistent and implausible - even the timeline is ropey. Sort of whatchable but not memorable.

Watched via BBC iPlayer and Chromecast.
Posted by Jeremy Green at 1:35 AM No comments:

I'm not sure this straightforward biopic of Mary Shelley/Wollstoncraft-Godwin is really necessary. It's not terrible, but I'm pretty sure I've seen most of this before - in Ken Russell's Gothic, but also elsewhere. Shelley is a bit of a shit, Byron is louche and predatory, Mary is a proto-feminist...

Watched via informal distribution and Chromecast.
Posted by Jeremy Green at 10:17 AM No comments: 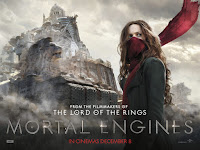 It was actually much better than expected - the look was great, and the acting and dialogue wasn't all that dire. Curiously I couldn't recall the plot at all from the book, but I read a synopsis later and it was quite faithful. A bit on the long side, and one or two rather Star-Wars moments, but quite watchable. Too bad there won't be a sequel.
Posted by Jeremy Green at 8:24 AM No comments:

Review of Hector and The Search for Happiness

Quite enjoyable film with Simon Pegg and Rosamund Pike. Some nice graphics and occasionally quite thoughtful - though at other times really a bit stupid (the Pegg character goes to 'Africa', and it matters so little that the country he is in doesn't even have a name, as if Africa is enough to locate and characterise it). Nice to see Toni Collette - I had no idea she was Australian, she seemed so British in Wanderlust.

It's based on a French novel, and I'm sort of wondering if that's worth reading.

Watched on Amazon Prime...don't think this saw the light of day anywhere else.
Posted by Jeremy Green at 8:35 AM No comments:

A really good but hard to watch Japanese film about a family of people at the bottom - making do through a mixture of petty theft, sex work, grifting, etc. There's child and other abuse going on too, though we don't actually see it; and lots of twists as the truth about the family and their relations to each other gradually become apparent.

I suspect that the film would have been much more shocking to a Japanese audience than it was to us - I think Japanese people are more law-abiding.

Watching this made me realise actually how ambivalent Western (well, UK and US) attitudes to petty crime are - although we like to think of ourselves as law-abiding and moral, we also tend to find petty crime (especially when the victim is an institution rather than a person) amusing rather than nasty...scammers and spivs are so often the 'heroes' of our comedies. Several recent American films (The Florida Project, Lean on Pete, etc) have also focused on people at the bottom, so that we're kind of familiar with the existence of this world, but I wonder whether a Japanese audience prefers not to think about it at all?

Watched at Lansdown Film Club in Stroud.
Posted by Jeremy Green at 1:41 AM No comments:

Review of "The Case for Working with Your Hands: Or Why Office Work is Bad for Us and Fixing Things Feels Good"

I mainly enjoyed this - though as with a lot of popular non-fiction books, it's a bit bloated. I enjoyed especially the bits about office work and how awful and degrading it is, both for those who do it and those who have to manage it...rather reminiscent of David Graeber at his best, though not so analytical. His description of working in the abstracting business were unpleasantly familiar.

I could relate to that in a way that I couldn't to the bits about cleaning crankshafts and grinding manifolds, because I have never done such a thing in my life and probably won't ever now. I think his insights on employment and wages/renumeration are pretty good, and I'd urge young people thinking about going to uni to read this and think about what it says.

I didn't so much enjoy the author's thoughts on nationalism, globalisation and so on...it felt to me a bit like he was heading in a Trumpian direction, even though at the time he'd written it the rise of the populist right was still only a dark cloud on a distant horizon.  Some of his cultural preferences seem a bit that way too - was it really necessary to read 'Soldier of Fortune' to rebel against his liberal upbringing?

Time well spent, though.
Posted by Jeremy Green at 1:24 AM No comments:

Review of 'The Black Eyed Blonde: A Philip Marlowe Novel' by Benjamin Black

Finally got round to reading this - I'd been looking forward to it for a while, and I wasn't disappointed. Very well written, enjoyable - not a pastiche, just a continuation of the Marlowe character in his natural setting. That said, it's not Chandler; in some ways it's better - the plot is much tighter and makes more sense than The Big Sleep, for example. On the other hand, the style is a bit less gothic than Chandler's - there isn't the same strength of feeling or atmosphere in the places that there is in his writing.

There's a slightly more modern sensibility - while one of the gay characters is sleazy and unpleasant, there's another minor character who is probably gay and nice with it. I think Marlowe is rather more intellectual here than he was in Chandler's novels.
Posted by Jeremy Green at 1:04 AM No comments: