Review of 'Collectively Yours" by David Merron 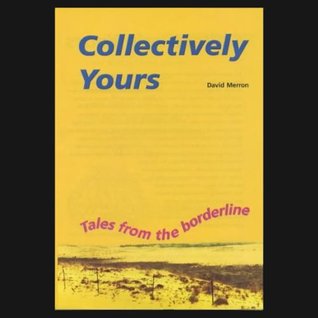 I've had this on my shelf since forever and never quite got round to reading it...until the pandemic and lockdown. I expected something that was more about Zionism, and more comedic...partly because the text is broken up by cartoons from kibbutz newsletters. Actually it's pretty honest, and pretty grim reading much of the time. The author seems to have been a Hashomer Hatzair member who made aliyah shortly after the establishment of Israel, and lived through some of the bleaker and harder times there. Life was precarious not only politically but also economically, and he illustrates this well with accounts of the business of trying to run the kibbutz as a farm -  while its residents were ideologically committed to all sorts of practices that didn't make much business sense, but also had expectations about their current and future living standards that couldn't really be satisfied with agricultural wages, in whatever form they were taken.

He doesn't engage all that much with the politics of Zionism, but he's a decent sort, and aware mostly that Palestinians got a raw deal...though he rather subscribes to the idea that the refugees fled under instructions from the Arab armies, with no blame at all attaching to the Israelis. When there would be peace 'some of them' could return, he writes.

On the other hand he's good on the miserable factional disputes within the left Zionist parties, and the odd sentimental attachment that so many seemed to have retained towards the USSR.

For me, living now in cohousing, the bitter little disputes about the minutiae of daily life seem more relevant that the distant struggels over whether to celebrate the October Revolution, and he's really good on those.

Posted by Jeremy Green at 6:22 AM No comments:

Review of 'Into the Beat'

Sweet teen movie about a young ballet dancer who comes from a famous ballet family, and is about to have the chance to audition for the New York Ballet, but somehow then falls in with a group of hip-hop street dancers and wants to do that instead. It's not a very clever film but it's kind. The multiracial group of street dancers are all honest, decent, friendly, and not at all threatening. There's no drugs, abuse, violence, even though the main street dancer character with which the girl develops a deepening relationship is an orpan living in a home for foundling children.

One could point out that the film does depict a privileged white person coming to an aspect of urban black culture, and then doing it better than the people that it belongs to because she's had the benefit of a lifetime of dance education. That's not the sort of film it's meant to be, though.

Watched on Netflix via smartphone and Chromecast.

Posted by Jeremy Green at 7:47 AM No comments:

Review of Children of the Snow Land

Sad, painful, beautiful film about Nepalese children from remote villages who are sent to school in the capital, where they are educated for free by a charitable foundation, but the consequence is that they leave their parents and may never see them again. Many of them are sent away from home when they're very young and barely remember the village or the parents. Some don't understand why they've been sent away - were they not wanted or not loved?

The film depicts the children making a one-off journey back to their home villages, and even though it can't be as unstaged and unscripted as it wants to appear, it's clear that this is a shocking experience for them, as they come to terms with the difficulty of the journey...that's why they don't go back for the holidays, or ever, and why no-one ever comes from the village to visit them. And they realise too the difference between the culture and the context of the village and the city; it's stunningly beautiful back in the mountains, but life is fragile and precarious and very poor. While the film is being made and the children are on their journeys there is an earthquake in Katmandu, which is very destructive and serves to underline how precarious their existence is.

Watched via a special online subscribed showing through Stroud Film Festival - alas we were too late to also subscribe to the Q+A, for which numbers were limited. At the time that didn't seem too terrible, but afterwards we were sorry not to see the children themselves taking part.

Posted by Jeremy Green at 7:39 AM No comments:

Review of 'Waiting for the Barbarians'

Based on the J M Coetzee novel of the same name, and no relation at all to the Cavafy poem which I was actually looking for when I came across this film. It's slow, beautifully filmed, and hard to watch because of the cruelty that it depicts. It's about empires and colonialism - the empire is fictionalised, so not any one particular empire. It's shot in Morocco, and some of the artefacts and settings are obviously Arabic; the colonial soldiers look a bit French (kepis and so on) but the imperial flags and emblems look Habsburg, and the epoymous barbarians look like Mongols on their shaggy little ponies. The people of the town look much more like Moroccans though.
Mark Rylance is great as the magistrate of the frontier fort, and he brings all the legacy he's got with his expressions, at once knowing and anxious and sort of powerless. There's a small homage to the movie of Beau Geste towards the end.
The magistrate's character is trying to be a good colonialist, with aspirations to not impact or trouble the town under his regime too much, but the film says that this is an illusion, and that you won't be allowed to do this.
Watched via VLC renderer, Chromecast and informal distribution...perfect quality, no buffering or any trouble.
Posted by Jeremy Green at 3:43 AM No comments:

A pretty terrifying drama in which we see a bright young woman with a series of debilitating diseases being looked after by her kind and caring mother, only we learn gradually - along with the young woman herself - that none of these things are true. Hard to say more without spoiling, but this is tense and frightening, with some themese that pretty much everyone will find disturbing - medical abuse, gaslighting, abduction and imprisonment, injections...just everything really.

Posted by Jeremy Green at 1:10 AM No comments:

This is a film about a Black young man in Detroit who's in trouble - with teachers, with the law, and so on - so his mother despairs of him and sends him to leave with his moved-away father who lives in Philadelphia. She drives and dumps him there because he really really doesn't want to go. His dad's not very pleased to see him; he seems to live in a near-derelict house which has a horse in the living the room, where the young man is expected to sleep on the couch.

This is a film about how poor downtrodden people can recover their self-esteem through their relationship with horses - in this case it's Black Americans in North Philadelphia, and along the way we learn about how lots of the original cowboys were Black but that's been erased from history and Hollywood. The poor people and their horses are just about clinging on in the face of encroaching property development, and the authorities (including a Black cop) are trying to move them out. The young man gets back in with a bad crowd of drug dealers, but he's increasingly drawn to the horse world too, especially as there's a young woman who is beautiful and likes him and is a fantastic trick rider.

I expected that this would be a redemption/feelgood sort of film in which a young man recovers his relationship with his dad, hard work, the community and so on...and it is, but it's really not trite, though the poster and the description make it sound like it is.

The acting is good, the filming and plot are pretty good too. I was moved to think about the status of horse ownership; in America it's convincing for it to be a redemption and recovery of status for poor people. In Britain, and perhaps in most of the rest of the world, horse ownership has always been a high-caste thing, with only a few very specific groups of people who are low-status having a relationship with horses - Romanis and Travellers. The film did remind me of the tough Irish kids in some estates in Dublin who were keeping horses on their balconies.

Posted by Jeremy Green at 1:03 AM No comments:

Review of "House of Orphans" by Helen Dunmore

Another near-perfect book by Helen Dunmore. Set in Finland in the early C20th, and capturing expertly the tension between Finns, Swedish-Finns and Russians in the Grand Duchy. Great characters, beautiful descriptions of food, nature, and inner life - and the expansion of Helsinki, and the life of underground revolutionaries. Some plot elements left unresolved at the end, and there's nothing wrong with that.
Posted by Jeremy Green at 7:29 AM No comments:

Perhaps unsurprisingly I didn't much like this. I think it harnessed the sympathy and warmth that people feel towards community choirs and then donated that to the military. The film shows a group of women on an army base in Yorkshire whose men have just been sent of on a tour of Afghanistan, and who are organised - by the too-posh colonel's wife - so as to keep them busy, and they form a choir which starts off badly but eventually triumphs and...you know.

Hard not to like the two lead characters because they are played by Kirsten Scott Thomas and Sharon Horgan, both of whom are great, even in this. But the plot is thin, and the sympathy to the army just wore me out...the military doesn't do anything wrong in the film at all, not even a bit of unsympathetic obstructive bureaucracy. There's a moment with a 'Stop the War' stall in the town where the woman go to do their first public performance, but if anyone ever considered using this as an opportunity to reflect on war, or this war, they just let it go.

Posted by Jeremy Green at 7:02 AM No comments: