A film in which a poor boy from the Hill Country of Kentucky triumphs over adversity through grit and character. It's about the poverty that rural white people face, though it's rather prettied up - the boy's mother is a drug addict who abuses prescription drugs and shoots up, but she still looks OK; she has all of her own teeth, her skin is Hollywood-grade, and so on.

It's apparently true story, based on an autobiographical book, so it can't be dismissed as unrealistic...but it must surely be unrepresentative. It's kind of flattering and reassuring about American society; the boy joins the Marine Corps, serves in Iraq - but we don't see any of that, just the bit where he joins up and has his hair cut, and then he's out and at Yale Law School.

BTW the boy as a grown-up at Yale has a brown girlfriend (he's not a racist or any sort of bad...there are hardly any Black people in the film, apart from a few shoppers and some nurses in a hospital scene or two) but she's Indian, from India. Are Indians the right sort of brown people for liberal and not-so-liberal Americans? No legacy of race relations, they're not even Muslims...?

Watched on Netflix via Chromecast.

Posted by Jeremy Green at 8:15 AM No comments:

Review of 'The Life Ahead'

Slightly uneven but moving film about a Senegalese orphan refugee in the southern Italian town of Bari, who's taken in by former prostitute Rosa (played by Sophia Loren), and the relationship between them, and between the boy and other people in his social world - the drug dealer he works for, the other kids that Rosa looks after and their prostitute mothers. It manages to be not predictable in what might have been a moralizing tale...the drug dealer isn't a cartoon villain and the world he inhabits is full of proper humans, not evil predators.

It's based on a book by Romain Gary (and apparently this is not the first film that's been made, and there was also a made-for-TV production and a stage musical). I'm not sure why it was important that the Rosa character was Jewish and a Holocaust survivor - is this an attempt to give some sort of gravitas to a subject that already has it in barrow-loads, or is there some subtle message about refugees now and then? I wasn't sure...maybe that's a good thing, because it might have been heavily messaged.

Watched on Netflix via smartphone and Chromecast.

Posted by Jeremy Green at 1:17 AM No comments:

A bit disappointed iwth this...it ought to be good, she's a brave person and (I think) a good writer. It's about not building walls between yourself and others, which is important though so very difficult.  It's so easy to believe that everyone thinks the same as we do, and to lose touch with how people outside our bubble are understanding the world and dealing with its troubles. Brexit, and Trump, and now some of the strange responses to the pandemic are evidence of this.
Of course she's a writer, not a political strategist, but I think she doesn't make enough of a distinction between reaching out to those people who are thinking differently to us, and making common cause with the people who are deliberately misleading them. There is a universe of difference between the working class people who voted for Brexit (or Trump) against their own interests, and people like Nigel Farage and Dominic Cummings. We need to reach out to the former, and reaching out means actually listening and understanding their ideas, even if we might not agree with them. We need to stand together against the latter, because they are really nasty and have nasty plans for all of us.
Posted by Jeremy Green at 1:29 AM No comments:

Review of 'Whistling for the Elephants' by Sandi Toksvig

So glad this is over...not a long book but it felt long, and boring most of the time. It's billed as a 'gently comic novel', which I think means it's supposed to be funny but it's mostly not. Somewhere in there might be a half decent book, but it seems buried in lots of superfluous detail and ostentatiously 'quirky' characters. Lots of pages pass without anything happening, and then there are little flurries of narrative development where so much happens that it's easy to miss it...particularly if you've got bored and started to skim, as I did. I love Sandi Toksvig on the radio, but this is not her best work.
Posted by Jeremy Green at 3:13 AM No comments:

We're in Almodovar territory here, only somehow without the emotional intensity. Not sure why, it's not the story line or even the cinematography...maybe Almodovar gets more out of his actors, or just has better ones. This is a Chilean film, about youngish trans person in a relationship with a middle-aged man (he's left his wife and family and moved to a flat with the trans person), and then the man dies suddenly and the family come to reclaim both his property and his memory. The man's brother is sympathetic to the trans person, the rest of the family much less so. It's sensitive (and mainly the Chileans come across as sensitive and intelligent about the situation too), but there was something lacking, though I can't exactly say what.

Watched via nformal distribution and laptop.

Posted by Jeremy Green at 2:46 AM No comments:

Review of 'My name is Joe' 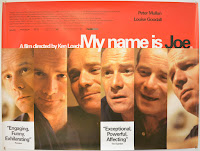 A painful but well-crafted Ken Loach film about the relationship between a recovering-alcoholic and a health visitor in Glasgow, with the former running a community football team for other vulnerable and impoverished adults, and teetering on the brink of a world of drug dealers and organised crime.

Watched on All4...slightly miffed that Channel 4 charges us money to have the ad-free version, and then shows us ads anyway, saying this is 'for contractual reasons'.

Posted by Jeremy Green at 2:03 AM No comments: