Review of "The Disconnect: a personal journey through the internet' by Roisin Kiberd 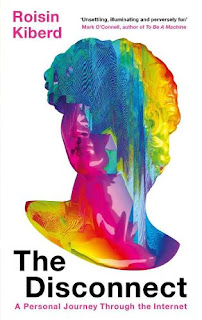 I started this book with zero expectation - I hadn't heard ot the writer, or anything about the book. I've really enjoyed it - though as is often the case, that doesn't seem like quite the right word. It's very much a personal journey, and Kiberd lays out all the different ways in which she is messed up...she calls it mental illness, and she's right really, but she's mainly (very) high functioning, so perhaps calling it that gives the wrong impression.

It starts out as relatively conventional - if acutely observed - journalism about the world of tech companies, by which she mainly means companies involved in the latter incarnations of the web. IBM and Microsoft get mentions every so often, but you won't hear much about say Cisco or Nokia or the telcos who build and operate the infrastructure on which the whole edifice of the internet rests. Lots about Facebook and Twitter and Google, and their surveillance/data-mining business models; she mainly reiterates the same stuff as Shoshana Zuboff (who's in the bibliography), and she doesn't engage with the rather more sceptical perspective of Cory Doctorow. Thankfully she writes much much better than Zuboff.

Then she moves on to energy drinks - which I've never used or even thought much about - and it's like a curtain has been drawn back and there's a bit of the world that I'd not known was there. And gradually she takes in the key aspects of human life - food, shelter, sleep, sex...and discusses how the internet has "disrupted" them. And she does it very well, shifting between personal experience and references to research. Some of it is very heartfelt, and some of that is hard to read; she really does lay her life bare.

I am not entirely convinced that it's the internet that has messed her up (which I think is what she might want us to conclude), but it's certainly determined the form her messed-up-ness has taken, and there's such a lot to learn from this strange and wonderful, and sad and painful, book.