Review of “Labour's Antisemitism Crisis: What the Left Got Wrong and How to Learn From It” by David Renton 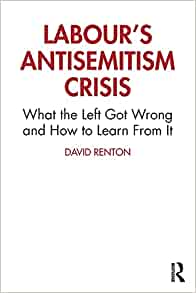 The last few years have not been fun for a lot of Jewish socialists. No sooner had the Labour Party - which some of us had written off as a vehicle for political change - unexpectedly elected an actual socialist as its leader, than we were deluged with a flood of accusations that the man, who had a long history of involvement in anti-racist struggles, was actually racist towards Jews.
A series of unfortunate events followed, and the responses to them became factionalised and also poisonous. It seemed almost impossible to assert that there was some truth on both sides of the many arguments - that the left generally, the left in the Labour Party, and the party itself really did have a problem with antisemitism and that at the same time there were unscrupulous people within and outside Labour who were “weaponising” this problem to attack the left in the party and Labour itself. And others who used the opportunity to attack anyone who’d ever tried to criticise Israel or Zionism.
David Renton gives a detailed account of many of the incidents and episodes...the Mear One mural, Naz Shah, Ken Livingstone’s Hitler outburst, Jackie Walker and the slave trade, IHRA definition, the Chakrabarti report, the EHRC investigation and its report...He’s a lawyer by profession, and this is reflected in the detail and also in the sometimes legalistic discussion; he refers to specific elements of anti-discrimination legislation and applies them to what actually occurred.. But despite this he remains resolute that no set of rules and procedures could have saved the day - what was needed, and still is, is a proper political understanding of antisemitism and its place in political culture.

The author is at great pains to be fair to the people he is writing about, and gives them the most sympathetic interpretation possible of what they said or meant to say. He does this with Jackie Walker, with Ken Livingstone, with Chris Williamson...and sometimes it feels like he’s just trying too hard, and that what he ought to be doing is blasting these people for wallowing in the fetid pools on the outskirts of political culture. He does the same with Luciana Berger, the JLM-supporting MP who I never had much time for, and who became a bitter enemy of the left.

He’s mainly kind to Jon Lansman, who emerges as something of a hero from the narrative, and he’s nicer to the JLM than I would have been, even though I know some people who are members and are actually quite decent. He’s even kind to the Chief Rabbi Ephraim Mirvis, treating his thoughts on Corbyn as if they were part of a considered and intellectually coherent commentary.

And he has a sensible, balanced approach to what Zionism means to Palestinians, and what it means to middle-of-the-road British Jews, which is not the same thing at all.

There are some things - inevitably - that don’t make it into the book. The various episodes involving Ken Loach, stretching all the way back to the ‘Perdition’ affair. The way that Corbyn himself, and his supporters, seemed unable to issue any condemnation of antisemitism without immediately adding “and all forms of racism”...a verbal tick which some have compared to the “All Lives Matter” racist response to Black Lives Matter. The often-repeated assertion that “our movement has a proud history” of antiracism, which is both untrue and irrelevant.

But there is lots more about the present conjuncture...the failures of the Jewish Communal leader in the UK - unlike their American counterparts - to address the antisemitism of the right. The characteristics of the Corbyn moment, including the influx of people who’d never been involved in politics before and the left’s inability to absorb them. The political culture of the left, and the nastiness of online communication and social media in general. And the strangeness of the political culture of the broader ‘movement’, which includes a huge swathe of people who identify with some sort of anti-establishment feeling, manifest this by a willingness to believe in multiple and sometimes contradictory conspiracy theories about ‘the elite’, and are ripe for harvesting by the far right even if they don’t think of themselves as any kind of facist. Anyone who has found themselves in a conversation with an anti-vaxxer, or a believer in 5G conspiracies, will recognise this and welcome Renton’s sensible discussions about what this means for us.
I’ve never met David Renton, though I’ve enjoyed reading his blog posts. We’ve exchanged a few messages via Facebook, mainly me telling him that I’ve appreciated something he’s written. But I wish I’d known him during the period that his book covers; it might have made it easier to live through the misery.
Posted by Jeremy Green at 9:09 AM